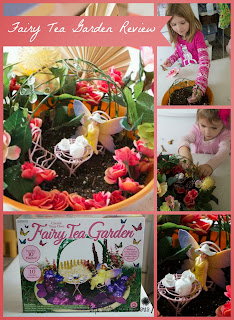 Today I want to introduce you to one of the new Fairy Garden Kits produced by Horizon Group USA, the Fairy Tea Garden! My girls have made fairy gardens with their grandma before, but I knew they wouldn't be able to resist the tiny tea set in this kit! (We received this kit in exchange for our honest opinions!) 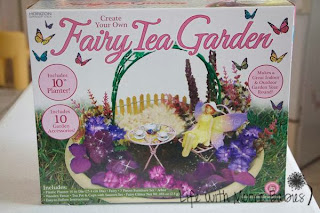 The kit includes a planter, arbor, little fence, two chairs, a table, a tea pot, two teacups, and a little fairy. It is also supposed to include fairy dust, but ours was somehow lost during opening; I am afraid it got thrown away with the packing in the box thanks to all the help I had! 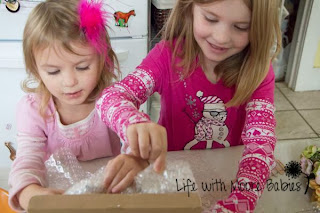 As you can see the girls were thrilled with the garden kit. Flowers and soil are not included, and we chose to go with silk flowers since fresh aren't too plentiful right now. Once we had those picked out I filled the base with soil and turned them loose. 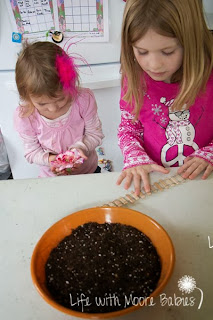 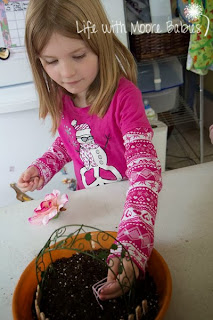 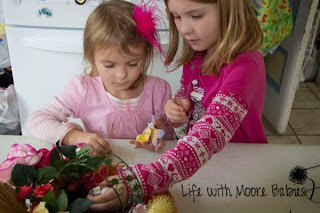 I did make suggestions along the way, so we were still able to see the fairy in the end, but they chose where most of it went. And even though we lost the fairy dust I did have some glitter (kindly provided by CraftProjectIdeas.com) to sprinkle the garden with. 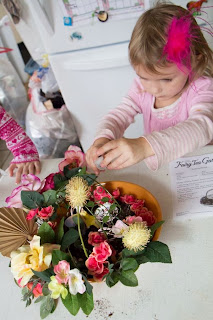 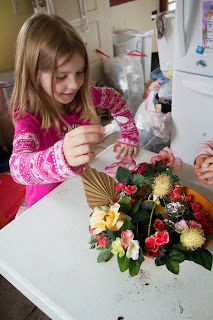 And here is their finished product! 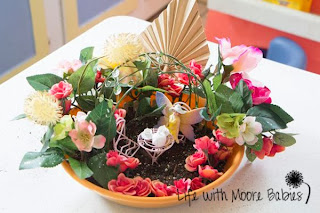 The fairy looks quite content in the pretty garden too. 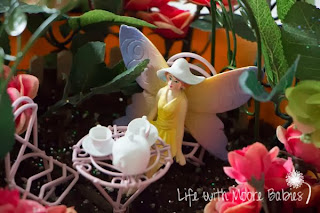 I do think we will be reworking this at some point because the little chair didn't sit well on the dry soil. Either I will buy foam and moss for the bottom, or we will plant real plants in it so the soil will be firmer with water. Either way should work fine, but I wouldn't recommend going with real soil and fake plants!
I was a little concerned with how quickly the fairy could be broken, and we tested that right out of the box (not on purpose of course). Nadia dropped her during the unpacking! Her wings came off, but they were easy to put back on. If it happens again they may get glued on.
The girls really loved this kit. I honestly think they each would have loved one of their own. I mean, what little girl wouldn't want to decorate her own little fairy tea garden!
The Fairy Tea Garden Kit along with a Traditional Fairy Garden Kit or a Terrarium Fairy Garden Kit will hit WalMart Garden Centers for 6-8 weeks starting now with limited availability through the holiday season. Then they may be back for spring. They are expected to retail for $19.97. These would definitely make a good gift option for your fairy loving little girl as they allow her to create something beautiful and yet all her own. If you use real flowers you can introduce gardening too!